Home > Insights > Jeff For Banks > Wal-Mart Bank is flying under the radar.

Wal-Mart Bank is flying under the radar.

I’m writing this post sitting in my car while my 11 year old warms up for a soccer match in Richmond, Virginia. Readers with children that participate in sports know too well of the gaps in time during weekend tournaments.
Yesterday, to kill time, we roamed the aisles of the local Wal-Mart. This store was six months old. Along the wall at the checkout lanes there was a mini storefront dubbed “The Money Center”. Curious creature that I am, I strolled in for a look. From the menu of services (see photo) it was evident that Wal-Mart is making a concerted effort to bank the unbanked and recent immigrants that send money home. Bill pay, wire transfers, and stored value cards would support this notion. 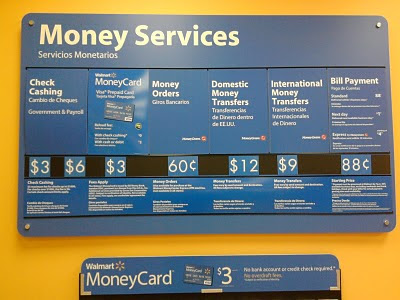 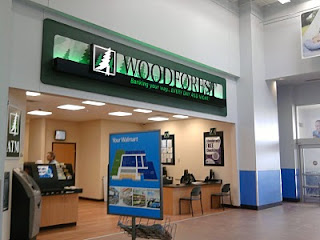 I took a brief walk down the front of the store, past The Money Center, and encountered my second glimpse of Wal-Mart’s banking strategy, Woodforest National Bank (see photo). According to the bank employee that greeted me, Woodforest is Wal-Mart’s #1 retail partner, has 54 branches in Virginia Wal-Marts and over 600 nationwide. Reviewing industry data from SNL Financial, Wal-Marts had 863 bank branches that had $6.0 billion in deposits at June 30, 2009. A significant percentage of those deposits belonged to Woodforest National Bank or its sister bank, Woodforest Bank (a Federal Savings Bank). Woodforest has dozens of proposed branches in the works. Presumably most will be in Wal-Mart stores. In 2009, Woodforest reported net income of $83.1 million, on $3.1 billion of assets (Woodforest is most likely a Subchapter S Corp because it reports paying no corporate taxes).
Wal-Mart has not conceded its entry into banking. It is executing a long-term strategy to bank the unbanked, recent immigrants, and those that roam their aisles. Their strategy is so long term, we barely notice it.
Most banks do not claim recent immigrants or the unbanked as their niche. Why? They would most likely be unprofitable customer segments. That strategy may be very short sighted. How many readers could date their family roots back one or two generations, when their ancestors were immigrants with very little in terms of financial resources? Yet, our families survived, and many thrived. Banking similar customers now may be the start of a long and profitable relationship. In fact, many bankers include ethnic niches in their strategy because the markets in which they operate are teeming with recent immigrants.
However, success banking those with very little financial resources may require managing low balance deposit accounts, loans to individuals or businesses with little credit histories or collateral, and other obstacles to success such as language barriers. Therefore, in most cases, we do very little for these customer segments and are allowing Wal-Mart to serve their needs. I am not convinced we should fear Wal-Mart becoming the bank of the unbanked. But the landscape is littered with those that competed head to head with the retail giant. I think our strategy should seriously consider such a competitive threat.

5 thoughts on “Wal-Mart Bank is flying under the radar.”