Home > Insights > Jeff For Banks > How I use Twitter

I am no social media expert. The media is so relatively new, I’m skeptical of those that make the claim. But I was making a half hour presentation to a bank board of directors regarding their strategic plan two weeks ago. The plan called for the bank to evolve its marketing capabilities to include social media. When I mentioned I had a Twitter account, half of my allotted time was spent in a Q&A on how I used it.
I was surprised by this turn, but impressed that a relatively older Board was so interested and had detailed questions about social media. In my mind, I thought “oh no, they must think I’m a social media expert”. But I pressed on to tell them how I, not knowing the right way from the wrong way, used Twitter. Here is the gist of what I said.
I signed up for Twitter about two years ago (@jeffmarsico), and have tweeted nearly 3,500 times. That is about five per day. Probably light compared to some, and moderate compared to others. I have no target regarding how many times I tweet. The reason I signed up was two-fold: 1) curiosity about the hype, and 2) as a replacement for a journal.
I have always thought of keeping a journal to remember things that occurred in my life. But I’m not one to sit down at night and jot down events and certainly not my feelings. So, at only 140 characters per tweet, I thought Twitter a decent substitute. So off I went with no strategy other than that.
I searched for people to follow using three themes: 1) local to my hometown; 2) banking-related; and 3) sports-related. Most that I follow have followed me back, either as a courtesy or judging that my tweets may interest them. I hope the latter, but am not foolish to believe this is always true. If you looked at the lists I have compiled on Twitter, you will note these three themes.
I am somewhat bipolar in how I use Twitter. Right or wrong, I typically tweet banking by day, and Yankees by night. This is an oversimplification, as I also like interacting with those that I have never met via Twitter, tweeting things happening in my personal life, and other sports teams that I follow.
Some may criticize how I use Twitter because while some tweets may be interesting to a segment of my followers, they may be irrelevant to others. For example, tweeting an interesting statistic I heard at a banking conference may interest @bankmarketing, but be a snore to @lennysyankees.
Although I still use Twitter with similar objectives to when I started, I have evolved in my thinking. Since joining, I started this blog. I use Twitter to update my tweeps (slang for your Twitter followers) that I just put up a new post. This week, the second-highest traffic source into the blog was from Twitter.
I now use Twitter as an education source. There is a whole universe of blogs and news sources that were unknown to me (see below for a couple good examples of very fine banking blogs). For example, my banking tweeps keep me updated via news links of what is happening in our universe. If I am working in the office, I read Twitter-fed articles that are of interest to me, in addition to my regular reading. When traveling and I see an interesting article or blog post in my Twitter stream, I “favorite” it for later reading.
I also follow sports via Twitter. For example, yesterday I kept apprised of how my favorite MLS soccer club, @philaunion was doing in their match as I was unable to watch it. Watching a Yankees game while following an #yankees hashtag stream and interacting with my tweeps is a whole different experience than watching alone. I would miss the snarky comments from @huntforringsnyy when AJ Burnett bumbles through a start.
I have made my Tweets private, which seems to be counter-intuitive to expanding a tweep-base. But I noticed that Twitter receives a pretty high ranking in search engines. For example, when searching “Jeff Marsico”, my Twitter account appeared fifth on Bing and third on Google. If somebody Googles me, I’m not sure I want their first impression to be “The barber chopped off my sideburns, again” (actual tweet that showed up in a Google search). To follow me, a potential tweep need only send a follower request, 95% of which I accept (unless you are a porn site or serial marketer). Most of those I follow back. But I suppose I probably lose potential followers and therefore relationships by making tweets private. I accept the trade off.

I don’t know much about establishing brand. For evidence look no further than my Twitter avatar (thumbnail picture, logo, or animation that comes up next to your tweets). I first started with a cartoon (see pictures), then moved to an image of myself after reading some blog posts on the subject, and I now use a simple photo. I suppose the evolution is because I would like to be viewed as a human being like everybody else, and not Shaggy from Scooby-Doo. See the @inking_media link below regarding avatars. Inkling Media is local to Central PA and I would not have known the owner, Ken, other than through Twitter. 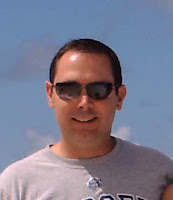 This segways to the most important benefit I received from Twitter: meeting people I otherwise would have never met. I’m not saying that I know my tweeps in any material way (although some I do because @shannon_marsico is a tweep). But I never would have known @sharistorm, a credit union marketing executive, mom, blogger, and author from Washington state if I did not follow her. Just this past week I spoke on the phone with @mbartoo about possibly putting on an industry event. I first met Mike via Twitter.
Could Twitter be a short-term fad that goes the way of the Betamax? Possibly. Is it the answer to our industry challenges? Doubtful. But an industry marketing consultant told me last week that financial institutions must learn how to leverage the spheres of influence of their business development officers. If you believe what he said to be true, then social media, and yes Twitter, can be part of that conversation. See Susquehanna Bank link below to a well-done bank blog positioning BDOs as experts. But I do not know many other FIs that are doing this well or have received material benefit from their Twitter or social media efforts yet. We are still in the experimental phase.
But my experimental efforts have given me things that were unknown to me when I first signed up for Twitter… i.e. knowledge, interactions during sporting events, and relationships (if only limited relationships). Perhaps your experimentation can result in lessons learned, brand advancement, and relationship building success. I don’t know, but in my experience it’s worth a try.
How do you use Twitter?
~ Jeff
Banking blog links:
Marketing Tea Party by Ron Shevlin
http://marketingteaparty.com/
The Financial Brand
http://www.financialbrand.com/
Blog post on Twitter Avatars by Inkling Media:
http://inklingmedia.net/2010/10/25/branding-engagement-pt-1-whats-in-a-name-or-face/
Susquehanna Bank blog:
http://blog.susquehanna.net/