I was recently moderating a strategic planning discussion with a multi-billion dollar in assets financial institution. During the discussion, the President of one of the bank’s most profitable divisions opined that less than $10 billion in assets was the “dead zone”. They had to grow to survive.
I challenged the thinking. But he held firm that the regulatory environment, changing customer preferences, and the pace and expense of technology were driving the market towards bigger is better. In that, I thought, he has a point.
But I’m always looking for support. This blog has dug deep into the numbers to support the notion that bigger is better. I spoke of the best performing FIs in ROA (see link here), and how growth impacted expense and efficiency ratios (see link here). Neither supported this regional president’s opinion.
This time, I searched for the top five best performing FIs by total return to shareholders over the past five years. After all, what is the point of becoming big if you cannot deliver value to shareholders? I used two filters: the FI had to trade over 2,000 shares per day so there is some level of efficiency in the stock (this created a larger FI bias in so doing); and the FI could not have a mutual-to-stock conversion during that period, which muddies the waters.
I will review my top five in descending order. The rest of this post goes to our number 5 bank:
#5: German American Bancorp, Inc. (Nasdaq: GABC) of Jasper, Indiana
German American is a 100-year old, $1.8 billion in assets bank servicing the businesses, citizens, and communities of Southern Indiana. Upon reviewing their investor presentations, annual reports, and financials, it is clear they are a conservatively managed, geographically focused financial institution. There is no discernible niche strategy to differentiate them from competitors. The chart below demonstrates total return versus an industry and general market index. 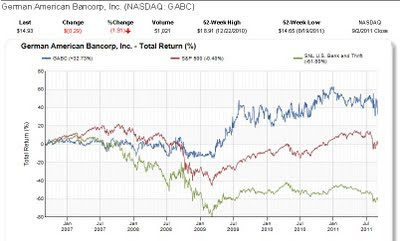 However, the past three years have proven to be the best three in their 100-year history. Not only did they survive the financial crisis, they found a way to thrive. Net interest income grew over $10 billion when comparing 2007 to 2010, while non-interest expense grew less than $5 billion. That is positive operating leverage driven by core banking during a period when FI earnings growth is driven more by a lower loan loss provision and not top line growth.
GABC continues to look for opportunities for growth. According to their investor presentation, growth opportunities were greater in nearby markets than their legacy markets (see chart below). To thrive into the future, the bank is executing on a three-pronged strategy in addition to maintaining their market share in legacy markets. 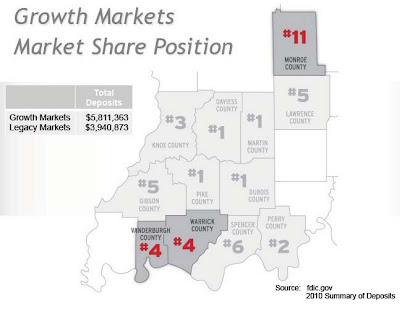 First was a strategy where management exercises the greatest control… de novo expansion. Second was a branch acquisition that added $50 million in deposits and $44 million in loans in markets where the bank desired to grow. Lastly, they acquired a $300 million financial institution, giving them strong market share in Evansville and surrounding communities.
Upon reviewing the pricing of that transaction, their first since 2005 and the largest in their history, I thought they overpaid. But in reading the summary to the issued proxy statement from that transaction, it was clear that the structure of the transaction was designed to 1) get the prize, and 2) make it as accretive as possible given the competition (or the perceived competition) for the target. Two years from now, nobody is going to remember the price-to-book GABC paid compared to other M&A deals of the day.
Indeed, the transaction closed this year on New Year’s Day, and GABC’s EPS annual run rate of $1.52 is 26% higher than 2010 EPS. Non-interest expense to average assets is lower for the first six months of 2011 compared to the 2010 year. The bank has achieved positive operating leverage as a result of their acquisition strategy and has positioned themselves for further expansion into new markets.
The result: yes they are bigger. No they are not big. And yes their shareholders should be pleased.
~ Jeff
Note: I make no investment recommendations in my blog. Please do not claim to invest in any security based on what you read here. You should make your own decisions in that regard. My 401(k) year to date return is -5.56%. Need I say more?
< previous post
next post >