Home > Insights > What is it about Midwest Financial Institutions?

What is it about Midwest Financial Institutions?

SNL Financial LP does an annual ranking of best performing banks using six core financial performance metrics that focus on profitability, asset quality and growth for the 12-month period ended Dec. 31, 2011. SNL measured each company’s standard deviation from the mean of each metric. The standard deviations, which were each equally weighted, were then added together to calculate a performance score for each company. They then sorted the top 100 by asset class… less than and greater than $500 million in total assets.
I was pleasantly surprised to see so many of my firm’s clients on the over $500 million list. I am patting myself and my colleagues on the back as I type, but readily admit, as much as I would like to take credit, it is the bankers that deserve the bravo zulu (well done in Navy parlance). 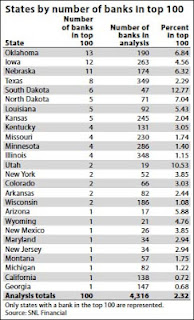 Interestingly, as I parsed through the data, I noticed that in the less than $500 million category were mostly Midwest banks (see table). If not a Midwest bank, then it was a niche bank. For example, the best performing bank in this asset category was Amerasia Bank, a Flushing, NY based financial institution focused on serving Asian-Americans in the borough of Queens.
Aside from niche players, I dug deeper to find out why Midwest banks dominated this list. I started at net interest margin, but found the SNL Midwest Banks average margin of 3.37% for 2011 was outflanked by the Southwest (3.57%) and the West (3.96%).
I checked how efficient Midwest banks were and found that they had the second best efficiency ratio, or how much in operating expenses it takes to generate $1 in revenue (i.e. the lower the better). Midwest banks had an efficiency ratio of 59% for 2011. But the West beat them with an efficiency ratio of 56%. Similarly, I reviewed net operating expense to average assets (net operating expense = operating expense less fee income), and found Midwest’s ratio of 0.97% ranked closely to the Mid-Atlantic (0.99%) but was higher than the West (0.82%).
My last ratio analysis was asset quality represented by net charge-offs/average loans. Midwest, although doing well at 1.32%, was outperformed by the Southwest (0.89%) and New England (0.60%).
Having looked at the common ratios which identify why certain banks do well and others don’t, it is unclear that one particular area is driving Midwest bank performance. But perhaps we can conclude that the Midwest did not experience significant real estate inflation and the accompanying asset quality issues, serve industries that have remained healthy during our economic malaise (i.e. agriculture), and have business models that foster good margins and strong expense discipline.
In other words, maybe Midwest bankers are so over-represented in SNL’s less than $500 million class because they are…. good bankers.
Why do you think the Midwest dominates this list?
~ Jeff

5 thoughts on “What is it about Midwest Financial Institutions?”