Five Ideas on How to Consolidate a Bank Branch

Fellow blogger Jim Marous asked me what I thought were hot stove issues for banking in 2014. Top of my list, branch consolidation.
During the second quarter 2013, bank branches generated a relatively low 2.04% total revenue as a percent of average deposits. Average deposits per branch were approximately $53 million. This is according to my firm’s profitability measurement peer group. Total revenue includes asset spread from branch-originated loans, liability spread from deposits, and fee income. 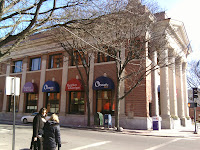 So let’s do some math: 2.04% x $53 million = $1.1 million. On the surface, this looks good for a branch that might cost $600 thousand per year in operating expenses. But hold on. What about paying for that army of operations, IT, compliance, finance, and executives back there at home office? According to my firm’s profitability peer report, support/overhead centers cost branches approximately 0.99% of deposits. In the case of the $53 million branch, that’s $525 thousand per year. Where are the profits now?
The cold hard truth resulting from the math is that branches have to be larger to deliver meaningful profits. Many if not most financial institutions are looking hard at smaller branches in smaller markets to consolidate and create a bigger branch that can deliver better results.
But what should you do to minimize customer attrition and negative perceptions if you decide to consolidate a branch? I have a few ideas.
1. Personnel – It all starts with your people. If you are consolidating a branch into another in the next town over, select your best people to run the consolidated branch, ideally with residents from each community. And by best, I don’t mean longest tenured. By best, I mean those that have the greatest potential to execute on your strategy.
2. Communicate with community leaders – One of the most often cited reason for leaving a struggling branch open is the perception closing it would have with the community. I suggest sending a bank executive, with your current/prospective market/branch manager to sit down with key community leaders to communicate your decision process, identify how you will continue to benefit the community although you won’t have a brick and mortar facility, and ask how your financial institution can continue to play a meaningful role in helping community leaders execute their long-term plans. Then take those ideas discussed and execute on them.
3. Be charitable – I am an advocate of giving branch/market managers a charitable budget for small ticket giving such as to the local little league, scout troop, etc. I also believe that financial institutions should focus their charitable dollars and time around few causes so they can have the maximum impact. Look for an opportunity to support a cause important to the residents of the community where you are consolidating the branch, either through dollars or time, and ideally both.
4. Be social and be local – Here is an idea that will have your compliance officer spinning… have locally run social media accounts that focus communication with people in very small geographies. That’s right, I’m proposing having a Schmidlap National Bank Morris County New Jersey Twitter account @schmidlapnbmorris. By being local, following local residents, promoting local causes, and highlighting local events, your bank will be followed back by locals that find value in what you are communicating. And don’t forget to add personality to the account. Nobody likes to follow a bland Twitter account that tweets the daily CD rate. If you closed the Parsippany branch, you could keep Parsippany residents better engaged by being the go-to source for super-local news, events, and causes.
5. Lend, lend, lend! – In the months before and after a branch consolidation ensure that your business development folks focus dedicate resources to finding business in the affected community. Make sure to actively communicate your continued commitment with signage such as “Another project financed by Schmidlap National Bank”.
Those are my ideas. What are yours?
~ Jeff
< previous post
next post >