Home > Insights > Jeff For Banks > Why Are Bank Net Interest Margins Under Pressure?

Why Are Bank Net Interest Margins Under Pressure?

Industry analysts are beating the drum of net interest margin (NIM) decline. Irrational pricing by competitors is often cited in strategy sessions.
But in picking through the numbers, there appears to be something else at work. Factually, NIMs were actually greater in 2013 than in 2007 for Bank and Thrifts, according to the financial institutions included in SNL Financial’s Bank & Thrift Index (2.91% in 2007 versus 2.94% in 2013). But NIM has been on the decline since 2010 when it stood at 3.31%.
Is it irrational pricing by the competition? I think all bankers will attest that at the forefront of the financial crisis, credit spreads worked their way back into pricing decisions. Banks were not only more cautious about the quality of the credit, but the yield on the loan too. And this partially explains why the NIM rose from 2007-2010. But has irrational loan pricing driven the NIM south since that time? The below chart shows differently. 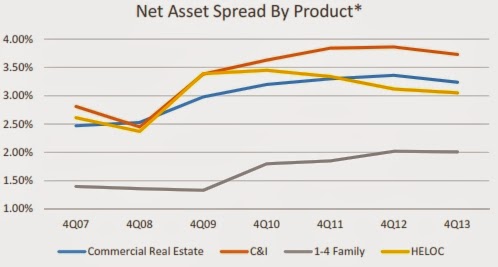 Source: The Kafafian Group, Inc.
The largest loan categories on bank balance sheets actually showed spread gains during this period, until they finally began to wane in 2013.  This analysis measures loan spreads by taking the actual yield of the loan portfolios, and charging a transfer price for funding the loans using a market instrument with the same repricing characteristics. In plain English, it removes interest rate risk from the spread, often called co-terminous spread.
How do we explain rising loan spreads, combined with decreasing NIMs? Well one reason can be the reduced benefit of deposit repricing. Financial institutions have benefited by the significantly reduced funding costs brought about by the historically low Fed Funds rate. But that benefit has been mostly exhausted. Leaving re-pricing of loans to be offset by, well, nothing.
The second culprit behind NIM decline since 2010 is the continued decline in loan to deposit ratios (see chart). Perhaps you hear talk of this in your FIs senior management meetings over the last couple of years. “We don’t need more deposits because we have no place to put them.” “We have tons of cash to lend.” Etc. 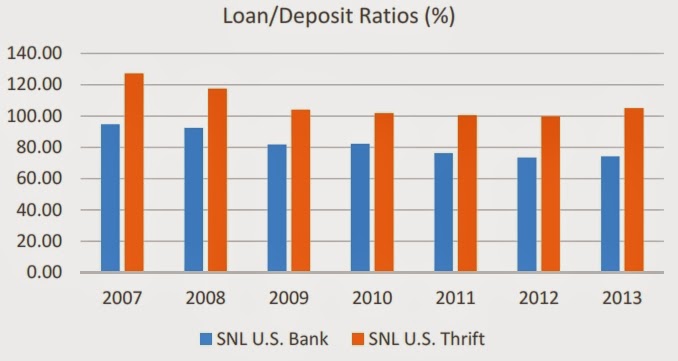 But loan pipelines are getting fuller as the tortoise-like economic recovery grows deeper roots. With many FIs still mopping up excess liquidity, competition remains strong for those “good” credits, whatever that means. Presumably it means borrowers who will pay you back. This will continue to put pressure on NIMs. Once rates rise, there will likely be additional pressures as the least liquid FIs start pricing up their deposits to keep funding their pipeline.
Will deposit rates rise faster than the loans those deposits will fund? Time will tell.
Do you think NIMs will continue to decline, even when rates rise?
~ Jeff
< previous post
next post >