Me to Bank CEO: Have you considered, instead of a growth strategy, maximizing profits and paying out most of it in dividends? CEO: *crickets*
And so it goes with my suggestion that slow growth, superior profits and high dividends is a viable strategy. Particularly for financial institutions in slow growth markets. This strategy could also manifest itself in mutuals and credit unions, as they can pay a bonus dividend to core depositors out of their robust profits.
But as I told one banker yesterday, not many are drinking my Kool Aid.
Growth is sexy. With growth comes accolades. Management gurus spew bromides such as “grow or die”. And so our industry has been cut in half in the past twenty years, because so many of us chose the latter.
I think it may have been a business professor that told me growth above and beyond market growth would only last for a short time. The bank CEO, mentioned above, was asking for my opinion on his growth and acquisition strategy. His market grew at 3.6% the prior year. The market leader, of the “too big to fail” variety, actually grew market share from the prior year while the CEO’s bank declined in market share. So they weren’t succeeding taking business from the 800 pound gorilla to sustain growth. Nor was their market growing at a pace that would fuel book value and EPS. Hence my suggestion.
When I suggested it he sought examples. I didn’t have the answer off the top of my head but he motivated me to look at the strategy from a total return perspective. I have an affinity for total return because it focuses on what you deliver to your shareholders, regardless of how you deliver it. Capital appreciation plus dividends, no matter the proportion. My suggestion to the CEO was 4% EPS growth combined with a 5% dividend yield delivering a 9% total return.
Getting back to my research, I reviewed all publicly traded banks and thrifts with between $1 billion and $5 billion in total assets. I eliminated any bank with greater than a 2% non-performing asset/total asset ratio to control for credit quality challenges that impacts profits and trading multiples. The results are in the below table. 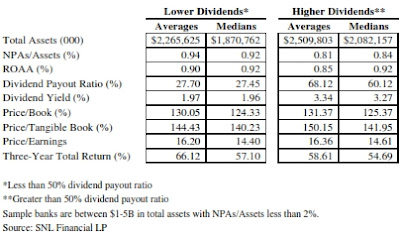 I admit that the lower dividend paying banks delivered a better three-year total return than the higher dividend banks. But not materially so. Certainly not a slam dunk that motivates the vast majority of bankers to opt for a lower dividend, higher growth strategy.
The remaining ratios are very similar: ROAA, price/book, and price/earnings. Shareholders don’t appear to penalize the higher dividend strategy by ascribing lower trading multiples to those banks’ stock valuations. In fact, by growing slowly, maximizing profits, and paying the majority of profits in shareholder dividends (or depositor dividends for mutuals and CUs), one could argue that this is a lower risk strategy and avoids the roller coaster “high-highs” and “low-lows” that banking’s high fliers tend to experience during economic cycles. Lower risk shareholders should expect slightly lower returns. So it is intuitive, right?
But no. Instead, those in slow growth markets set sail hoping to perpetually grow faster than their markets will allow, and rely on acquisitions to stoke their growth. Grow or die. Are we going to get a different result than we have gotten?
~ Jeff
< previous post
next post >