Home > Insights > Jeff For Banks > Banks Are Far From Amazon

Banks Are Far From Amazon

If you haven’t read the New York Times article on Amazon working conditions, you should. By trying to create a meritocracy, the unintended consequence included nothing more than petty zinging and flaming. The kind you see on social media. Except at least Amazonians do it to your face, but in a public setting. My response to reading the article is in my tweet below. 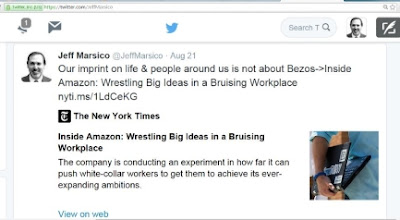 Jeff Bezos refutes the characterization of Amazon in the article as a soulless, dystopian workplace, stating it’s not the Amazon he knows. Possibly true. Using anecdotes to make your entire case is lazy. What is the company turnover rate? How much overtime do they dish out? Because the article indicates nights and weekends are the norm. A little facts supported by anecdotes would have been more effective, and in keeping with journalistic standards. Not that I’m an expert on journalistic standards, but when a blogger like myself comments on lack of facts from the Old Gray Lady, journalism in the USA is in trouble.
While reading the Amazon article, I thought to banking. How far from a meritocracy we have become. In some financial institutions, the inertia reminds me more of a government agency than a shareholder owned company. One bank chairman said that when he wants to get something strategic done quickly in his company it takes two weeks. In banking, it takes two years.
Regulation counts as a progress inhibitor. Especially since the financial crisis. Bankers are wary of charting a different path for fear of how regulators would react. Plain vanilla business models receive the most favorable examiner reactions. Veer off the norm, scrutiny is sure to follow.
Internal to our banks is the inertia that comes from compartmental-ism, mediocrity, and old-school leadership. While there is not much we can do about regulatory attitudes towards moving our industry forward, there is plenty to do about our business models.  Here are a few suggestions to create a greater meritocracy that rewards moving the bank forward while minimizing the unintended consequences that Amazon is likely dealing with.
1. Create incentive systems with meaningful and transparent awards for achievement. I have spoken and written on this subject often. Use incentives as a positive means to reward behaviors positive to your institution. At Amazon and in many other meritocracies, incentive systems are wielded like sledge hammers to drive underachievers into the ground. Instead, lift achievers up. Persistent underachievers will self select out or be shown the door.
2. Fire people. When an executive tells me about the issues they are having with a subordinate that is hurting the bank, I always ask if the subordinate is an employee at will. Why? Because you can fire them! As one banker told me, there is nothing more motivating than a strategic firing. If an employee is not putting forth the effort, has a bad attitude, or simply doesn’t care or works against where you want the bank to go, FIRE THEM! The remaining employees will take note.
3. Build a collaboration culture. Some banks have tried this and it morphed into a crazy number of meetings. But you must forge forward with the pre-eminent question being “how should this be”? Usually the answer is obvious. Get the people you need to move an initiative forward into a room and don’t leave until you work it out. You don’t need standing meetings for this. Be bent on taking action once the talking is done.
4. Promote learning from failure. Do not penalize failure. This is true if a bank employee is working to innovate and move the institution forward, but the initiative fails. I often hear about bank employees getting “written up” (an audit comment, examiner comment, or supervisor action) for trying a process that may not have worked or unknowingly violated an esoteric rule. Wrist slaps are for employees that ignore supervisory directives, or knowingly violate policy. Not for trying something that doesn’t work out. That’s called innovation.
What do you recommend for creating a meritocracy without pounding your people into the pavement?
~ Jeff

3 thoughts on “Banks Are Far From Amazon”