Home > Insights > Jeff For Banks > Compete With Yourself

Our daughter worked from our kitchen table this past week because the Pope was visiting Philly and her firm advised her to get out of town. I worked from home one day, so we got a chance to go up to the local college, workout, and beat back the age monster together (see picture). 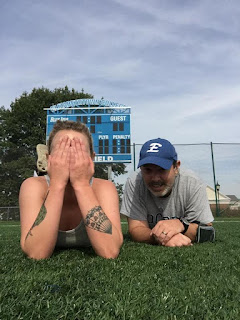 She was a college athlete (softball). And she said it was more difficult to workout as an adult because there were no goals and you didn’t get the quick gratification of seeing success on the field. Instead, she said, she found success competing with herself. Doing more crunches than her last workout, putting an extra 10 pounds into her lifts.
This got me thinking about a speech I heard by George Brett, the legendary third baseman for the Kansas City Royals. George said he had a problem with today’s baseball player: lack of hustle. He told the story of how he would compete with himself when he grounded out, seeing how far he got down the line before the ball hit the first baseman’s mitt. Same with fly balls. How far could he get to second before the outfielder made the catch. Imagine that with today’s player who is more likely focused on his stats compared to others.
But wait! Isn’t that exactly what we do in banking?
The most ubiquitous culprit is the Uniform Bank Performance Report (UPBR). Not sure if there is an equivalent in the credit union world. If so, let me know. But every quarter senior executives pour over the UBPR to see how they did against similar financial institutions. How similar? Asset size. So if an ethnic, SBA-focused financial institution is the same size as a rural, ag-focused bank. Boom! On the same UBPR.
Differences in business models aside, are we satisfied comparing ourselves to other financial institutions? Five years ago I wrote on this topic in a post titled The Folly of Peer Groups.  I suggested comparing yourself to institutions that are like you, and institutions that you aspire to be like. But today I’m suggesting going further.
Compete with yourself. Continuous improvement. Asking yourself each morning how to be better at the end of the day than you are at the beginning of the day. That if you fail at something, don’t count it as failure but as a lesson learned. And share your lesson learned with colleagues so they can benefit from your experience.
You lead by example. It must have been difficult for a Kansas City Royal to trot to first base on a ground out when the star player hustled so he can be three steps away from the bag when thrown out instead of four. That type of leadership impacts a culture that doesn’t show up on a UPBR. But it will.
I don’t think the greatest companies or the greatest leaders run peer groups to make sure they are better than average. Side note: Wouldn’t that make a great epithet on your tombstone? “Here lies Jeff. He was better than average.” Not really.
When I coached lacrosse, I had pre-season meetings with parents. In those talks, I set parent expectations. One was that I don’t compare players to the player next to them. Parents fall into traps thinking that as long as their child played better than the one next to them, their spot was assured. But what if the less talented girl hit 95% of her potential? Being one of the best on the team and only hitting 60% of your potential is not a win.
And we should stop treating it like one.
~ Jeff
< previous post
next post >