I frequently moderate strategic planning retreats. A recent discussion surrounding bank peer groups was very interesting. I have written and spoken about using peer groups constructively versus striving for “above average”. This discussion related to the different paths superior performing banks took to achieve their notable profits.
There were many more than three banks in the peers we reviewed. But the three banks highlighted in the table below achieved superior results. So the board and management team wanted more discussion on what their numbers were telling us. 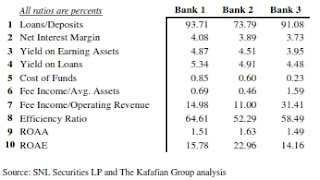 Bank 1’s superior profits start with their yield on loans, complemented by their loan to deposit ratio, which resulted in a very good net interest margin in spite of their relatively high cost of funds. This is a typical profile of what I term an “asset driven” bank. It leads with the loan, solving for funding as it fills its pipeline. This usually results in a relatively higher cost of funds, as the quickest way to line up funding tends to be rate. I also suspect that this bank, absent seeing more data, might have had a one-time event such as recapturing some profits from the loan loss reserve. Because it’s profits, at 1.51% return on average assets, seems high based on its other ratios, even though it sports a great yield on loans.
Bank 2 has a relatively low loan to deposit ratio which impacts its NIM, even though it has a solid yield on loans. They just have fewer loans relative to their balance sheet than Bank 1. And we know that the bond portfolio delivers smaller yields than loans. Rather, this bank achieves superior profits by an impressive efficiency ratio. This ratio measures how much in operating expense it takes a financial institution to generate a dollar of revenue. So the lower the better. In Bank 2’s case, it takes 52 cents to generate that dollar. Since they don’t generate significant fee income or have the NIM of Bank 1, we can assume this bank is cheap. As I often say, they can squeeze a nickel through the eye of a needle.
Bank 3 does have a +90% loan to deposit ratio, yet has the lowest net interest margin of the lot. The reason for their low NIM is their yield on loans. I suspect this bank prices aggressively to get loan deals. What this bank does considerably better than most, is in their Cost of Funds. In other words, it generates low-cost, core deposits. In fact, it’s percent of CD’s to total deposits was 14%.  I often comment that low cost of funds banks, or high core deposit funded banks, receive favorable stock trading multiples because they have built something that is difficult to replicate. This bank currently trades at 195% of book value. A significant premium to market, even though their earnings multiple is in line with the market. The bank is a strong earner.
It is important to note how strong earning banks achieve their results. Because when setting strategy, you have to chart how the strategy leads to profits. If you intend to generate superior results by creating a difficult to replicate core funded bank, it would be good to set sail with that course in mind.
Because without identifying your destination, no wind is favorable.
~ Jeff