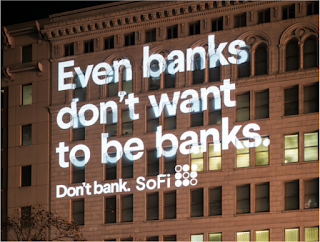 Since 2011, SoFi has funded over $6 billion in loans (through December 15, 2015). And today, they are embarked on a campaign against banks.
Warren Buffett was right when he said “You never know who’s swimming naked until the tide goes out.” SoFi started in 2011, so the tide has not yet gone out on them. Like most marketplace lenders, SoFi claims a borrower risk rating system that is better than the FICO score. And in fact, is claiming a FICO score free zone. How good is their system compared to FICO, or other FinTechs that feel they are more evolved in credit risk management? We don’t know. And I suspect we won’t know. Until the next time the tide goes out.
Remember during the depression when the National Housing Act of 1934 created the Federal Housing Administration (FHA). Perhaps not. But during the depression, the typical mortgage was a five year balloon. So when 1/3 of borrowers lost their jobs, they were unable to re-finance when their balloon came due. Forcing them out of their homes. In came the FHA, with mortgage insurance to protect lenders, and the beginning of what is now a 30-year mortgage with a significant secondary market.
The secondary market removes unpalatable interest rate risk from financial institutions’ balance sheets. Similarly, SBA guarantees reduce risk for small business lending. Reducing risk by transferring it to someone else is not new.
Marketplace lenders reduce risk for their loans similar to how financial institutions do it for mortgages and small business loans. They transfer it to investors. Many of the investors are other financial institutions!
Sure, the originating institution retains some risk. I’m not privileged to see the contracts and know if there is recourse back to marketplace lenders for their loans. For financial institutions originating and selling residential mortgages, they retain some risk for early pre-payments or early defaults up to a certain point in time. And for fraud without a time limit. Absent those items, mortgages sold in the secondary market are at the risk of the investors.
So, too, I would suspect is the risk to SoFi and other marketplace lenders. Meaning the lion’s share of SoFi swimming naked when the tide goes out is born by those that buy those loans. It is an agency problem that we saw before, in the 2007-08 mortgage crisis, when mortgage brokers and bankers, knowing they were transferring risk, pushed all sorts of loans through the system, so long as they adhered, however loosely, to the investors’ underwriting criteria. What was best for the borrower was an after thought, in many cases.
Each recession is different. And certain asset classes are affected differently. In 2007-08, the first asset class impacted was residential mortgages. Banks likely felt it more in their investment portfolio as they were chock full of collateralized mortgage obligations and mortgage backed securities. Fannie Mae preferreds, anyone?
Next recession may be different. And it will be interesting to see how the portfolios generated by these marketplace lenders perform. And who would actually own those portfolios should they tumble.
Maybe we can create another agency like the CFPB! Something to look forward to.
~ Jeff
< previous post
next post >