Why No De Novo Banks? Math.

There is increasing chatter about relatively small banks, under $100 million in assets, looking for an exit. Because they are so small, there may not be a line of buyers waiting for a book to come out from the investment banker. So perhaps an investor group would be interested in taking out current shareholders and recapitalizing the bank?
During previous periods of bank consolidation, the net decline in financial institutions was buffered by the number of de novo banks. For example, in 1997, the merger peak in the past 20 years, there were 725 mergers, and 199 de novo banks.
Not so today. Conventional wisdom puts the blame on regulators. They’re not approving charters, or making it extremely difficult to do so. The regulators deny this. But there is truth to it, in my opinion.
If a bank has a business model that is unique, or serves a narrow constituency, regulators push back in the name of concentration risk, or untried business models. I recall an Internet bank that was trying to get off of the ground in Michigan in the late 1990’s. The concept was new, and growth was projected to be robust, albeit not off the charts.
The FDIC required the bank to raise $20 million in capital, a tidy sum back in the 1990’s when banks got started with less than half as much. So because the business model was relatively unique, the regulators required a very high level of capital. The bankers couldn’t raise it, and the de novo never got off of the ground.
Today, regulators still favor plain old business models. Yet they are also requiring high levels of capital. Primary Bank in New Hampshire, started last year, raised around $27 million. Sure more is better from a safety and soundness perspective. But that capital comes from somewhere. And that somewhere, investors, have choices on where to invest their money.
In comes the math problem.
Let’s say an investor group, tired of big banks making decisions about their communities hundreds of miles away, decide to explore starting a bank. They put together an outline of a business plan, project out their financials several years, and go visit the FDIC.
The FDIC looks at the business plan, critiquing any part of it that is outside the norm, serving a particular industry or industries, relying on non-traditional distribution methods, and so on. They suggest that being more plain vanilla will increase their chances of approval. And by the way, it will require $25 million in startup capital.
The investor group puts together a prospectus, and begins soliciting shareholders for commitments.
Now, Joe Investor has $10,000 to invest. Does he put it with this new bank? Or does he invest in an S&P 500 Index Fund?
The S&P 500 has a compound annual growth rate of 5.0% over the past 10 years, and 13.0% for the past five years. And The 10-year includes the Great Recession, so Joe Investor projects the S&P 500 compound annual growth rate of 9.0% for the next 10 years. For reference, the S&P 500 grew 9.2% annually during all of my adult years since 1984.
For Startup Bank, the organizers have projected the following over the next 10 years. 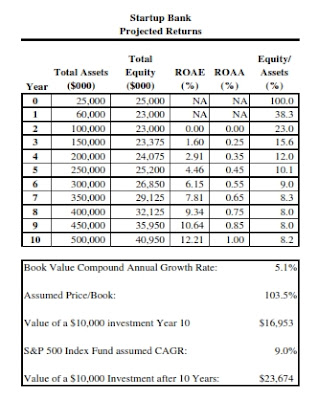 A $10,000 investment in a de novo bank pales in comparison to the return Joe Investor could receive by investing in an S&P 500 mutual fund. And if Joe needs his money out of the fund, he places his trade and the money is in his bank account within three days.
Startup Bank, on the other hand, would likely trade very little. For all publicly traded banks between $400-$500 million in assets, the average trading volume is 1,432 shares per day. Joe putting in a sell order on his holdings could move the market and decrease his value. I learned this the hard way, by the way. So take it from my experience.
Lest you think that the dearth of de novo banks is a regulatory problem. I got news for you. It’s a math problem.
~ Jeff