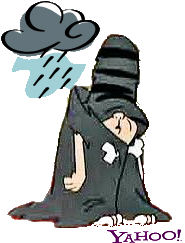 And if you think this culture started recently. Guess again. Google the much lionized former Norwest and Wells Fargo CEO Dick Kovacevich that touted the “eight is great” cross-sell ratio. Stumpf has worked for Norwest/Wells for thirty four years.
I guess eight isn’t so great after all.
And the Schleprock cloud hovers above us all.
Thank you Mr. Stumpf.
~ Jeff
< previous post
next post >