This past week I attended the American Bankers’ Association National Conference for Community Bankers (NCCB). At such affairs, I like attending the general and education sessions for my own knowledge, and for the benefit of my clients and readers.
The NCCB was no different. If there was one session that struck me like a lightning bolt, it was the general session, with keynote speaker Marc Randolph. It was riveting, and challenging. And I’m not too sure bankers are up for the challenge. 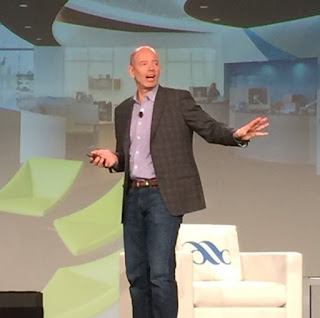 Riveting because he spoke about the founding of Netflix. The idea was not a lightning bolt, as Netflix co-founder Reed Hastings tells of his late fee epiphany when returning the movie Apollo 13. Rather, it evolved during long commutes between Hastings and Randolph. In other words, car pooling planted the seeds of Blockbuster’s demise. This factoid is sure to get me social media shares from environmentalists.
The tale of the early years of Netflix is very instructive to an industry experiencing change. Think banking. The talk was challenging because Randolph’s keys to being successful in such an environment may, and should scare bankers.
Marc Randolph’s three keys to business success:
1.  Tolerance for Risk
Number one is already turning off readers. Low risk tolerance is suffocating. Why? It promotes a “no mistakes” culture. When you have low tolerance for risks and mistakes, you lose innovation. Who will stick their neck out in such a culture? Who will endure five failures to discover that one idea that turns your business model on its head and plants the seed for an enduring future? Bankers may hate the analogy, but Blockbuster was not willing to gut their main revenue source to build out and promote streaming. Does the term “disintermediation” in banking sound familiar?
2. An Idea
And it doesn’t have to be a good idea. When Netflix decided to forego late fees their business took off. If Randolph was writing a letter to himself how he thought Netflix would evolve in five years it would not have read like it played out. But they tried anything and everything to get subscribers, and more revenue into their company. They had many failures. The idea wasn’t an “in the shower” epiphany. But after trying several things, the one that stuck ended up being the hurdle that would eventually lead to what we have today. An idea. Not a good one. As Randolph mentioned, many of us have great ideas in the shower. Few of us get out of the shower and do something about them. In a culture with a low tolerance for risk, would one of your bankers step out of the shower and do something about their idea? Would such a person even work for your bank?
3. Confidence
It takes confidence to fail several times, and to get up and keep going. As Rocky once said, it’s not how many times you get knocked down, but how many times you get knocked down, get up and keep moving forward. That’s right, I made a Rocky reference. Say what you will about the Italian Stallion, when he was in the ring, he had confidence to go toe to toe with the best in the business. Think about little $5 million in revenue Netflix, going toe to toe against multi-billion dollar Blockbuster.
I will close by paraphrasing Randolph. Business success is not about coming up with the best or even good ideas. It’s about building a culture to try lots of bad ideas.
And with our own culture in banking, to try few ideas and even fewer that have not proven tried and true, do we have the culture to succeed in a changing industry.
Should we build such a culture? And if so, how?
~ Jeff