Home > Insights > Jeff For Banks > Fintech’ers Will Be Right on Branching. Unless Bankers Act.

Fintech’ers Will Be Right on Branching. Unless Bankers Act.

Are branches dead? The conventional wisdom from the shouters would be yes. Look at transaction counts. Look at the decline in branches since 2009. Look at the surveys.
I read a recent interview of Members 1st Credit Union CEO Bob Marquette by S&P Global Market Intelligence (link requires subscription). When asked, Marquette said of the death of the branch: “I think it’s bullcrap. I think banks are closing branches for one reason: to cut costs and prop up their earnings and boost their stock price.”
Clearly he is not attending FinTech conferences.
Remember those predictions about the checkless society, and cash being dead? Yet both live on. Although the trend is decidedly in that direction. I sometimes quip that FinTech prognosticators are like futurists. They make educated predictions. And they typically miss the timing. Sometimes by decades or generations.
In Brett King’s 2012 book, Branch Today, Gone Tomorrow, he called for a 50% reduction in branches while asking what would banking look like in 2015. Between 2012 and 2015, there was a 4% branch reduction. As Bob Uecker would say, “Just a bit outside.” The decline between 2015 and 2016 was 1.5%. I’m not sure if Brett’s intention was to make a prediction or a wish.
But I believe Brett’s prediction will become truer by the year. I am not smart enough to make a prediction combined with the timing of the prediction.
I also believe that branches can be developed as competitive advantages for community financial institutions. Much like the credit union CEO thinks his branching strategy differentiates his CU. But, as our current strategy execution stands, there is much work to be done.
On March 6th, I tweeted one inconvenient truth for FinTech’ers (see pic). 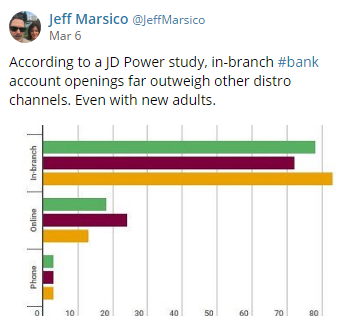 The green bar was all respondents. The red: millennials. The gold, Gen Z, which I didn’t know was a Gen yet. They are under 21 years old!
And when my friend and fellow bank consultant Mary Beth Sullivan from Capital Performance Group in DC shared the post in the below pic on LinkedIn, it stirred a spirited rebuttal. I only hope my friend Ron Shevlin from Cornerstone Advisers still owes me a drink. Don’t click on those links! They’re competitors. 🙂

I don’t want to engage in a tit for tat on studies. Figures don’t lie but liars figure, right? Note to Mary Beth and Ron. I’m NOT calling you liars (I would be calling myself one too). No alerting the press required. And would they cover consultants bickering anyway?
I digress. Back to the post. Perform this common sense test when there are a group of you in a room… a group of regular people. Not bankers. Not bank consultants. Not FinTech’ers. Ask for a show of hands how many people bank with a bank that has a branch in the town where they live. My guess, if you asked 10, eight would raise their hand. Common sense.
But perhaps it would’ve been nine in 2012. I will give the branch doomsayers that. And I think the trend would go down over time. So here is how I think bankers can slow branch decline. I don’t think it will stop. Because the large banks look to branches for continuous cost savings, and I don’t foresee that changing. Which is good if a competitive advantage is what you are after.
1. Identify what makes the branch important to your customers. I think if bankers asked this from the start, we could’ve avoided the WaMu Occasio experiment. Although I read a story today about a FinTech firm in Vietnam opening bank branches because the government requires an employee to verify the account holders’ identity in-person. But the rest of the branch is essentially a customer hang-out. Like Occasios were supposed to be. If this is important to your customers, then perhaps a hang out is what you should build. But my “ears to the tracks” tells me customers want to open accounts, get loans, and solve problems at branches. Small businesses still want to drop off deposits. So take the pulse of your markets, and make the branches into what your customers want and will want them to be.
2.  Elevate branch employees. If your market wants business acumen from your branch employees, can they do it? Did you know the University of Toledo offers a Certified Business Advisor designation? And banking associations offer a host of certificates for increasing the knowledge base and skill sets of branch employees to meet the emerging needs of customers in a new-branch environment. The all-too-familiar approach of putting branch employees in a position to fail because we elevated them from teller-head teller-assistant branch manager-branch manager without giving them the skills to do what your market demands will doom the community banks’ attempt to position branches as a competitive advantage.
3.  Make your branches look the part. Once you identify what customers want and set out to elevate employees, take a look around. I wrote about branch decor in these pages. In it, I wondered if customers would drink your brand Kool Aid if your branch manager had stacks of paper on her desk, or if your carpet had coffee stains from 1984. Cher got a facelift and looks pretty good. So should your branches.
4.  Pull the plug on poor performers. Where will you get the money to pay for those higher skilled branch managers (and perhaps all branch personnel), the training it will take to get them there, and a date with HGTV’s Fixer Upper? By pulling the plug on those branches that were $18 million in deposits last year and grew to $18.3 million today. They are dogs. You’re investing $500k (more or less) per year per branch to keep them open. And you will lose very few deposits by closing them, particularly if you have a branch nearby and good online banking technology. Stop it! Close them! Invest the savings.
Interesting that I call for branch consolidation when I’m arguing for the relevance of branches, no? I’m a modern-day consultant.
You can do the above or some variation of it. Or….
You can continue with business as usual, or some minor modification of it. And run the risk of proving the branch haters right. Your choice.
~ Jeff

4 thoughts on “Fintech’ers Will Be Right on Branching. Unless Bankers Act.”