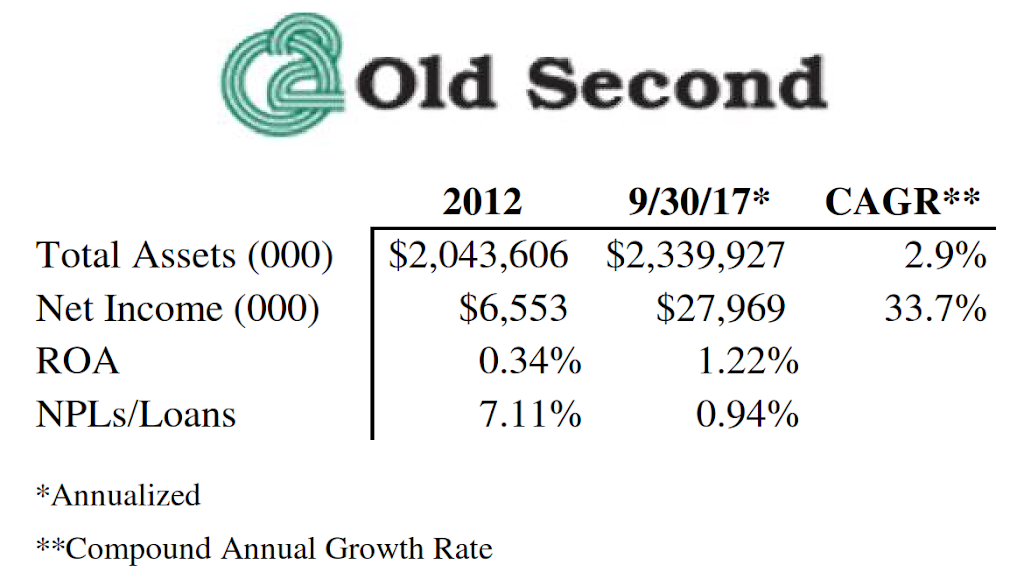 For the past six years I searched for the Top 5 financial institutions in five-year total return to shareholders because I am weary of the persistent “get big or get out” mentality of many bankers and industry pundits. If their platitudes about scale are correct, then the largest FIs should logically demonstrate better shareholder returns. Right?
Not so over the six years I have been keeping track.
My method was to search for the best banks based on total return to shareholders over the past five years. I chose five years because banks that focus on year over year returns tend to cut strategic investments come budget time, which hurts their market position, earnings power, and future relevance than those that make those investments.

Total return includes two components: capital appreciation and dividends. However, to exclude trading inefficiencies associated with illiquidity, I filtered for those FIs that trade over 1,000 shares per day. This, naturally, eliminated many of the smaller, illiquid FIs. I also filtered for anomalies such as recent merger announcements, mutual-to-stock conversions, and penny stocks.

Old Second is a single-bank holding company headquartered in Aurora, Illinois. It has $2.4 billion of assets and operates twenty five branches in the western suburbs of Chicago.  The Bank, Old Second National Bank, lost a whopping $156 million in 2009 and 2010. Whopping because it went into those years with $247 million in tangible equity. How did they lose it? Bad loans. Their non-performing loans (NPL)/total loans ratio peaked at 12.54% in 2010, and between 2009-12, the Bank charged off over 11% of its loan portfolio. That got regulator’s attention in the form of a May 2011 Consent Order 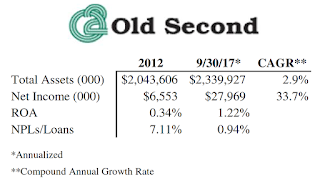 (CO). But they didn’t bury their head in the proverbial sand. They hit their challenges hard, and had the CO lifted a little over two years later. Quite an accomplishment given the gravity of their problems. Today, NPL/total loans is a manageable 0.94%, and the Bank ROA/ROE year-to-date is 1.22% and 11.61% respectively. These comeback kids have delivered a 958% total return to shareholders over the past five years. Welcome to the list!

#2. Independent Bank Corporation (Nasdaq: IBCP)
Independent Bank dates back to 1864 as the First National Bank of Iona. Its size today, at $2.8 billion in assets, is smaller than it was a decade ago. It is a turnaround story because the bank was hammered with credit problems between 2008-11, when it lost over $200 million. In 2011, at the height of its problems, non-performing assets/assets was nine percent. Today that number is 2.6%. Exclude 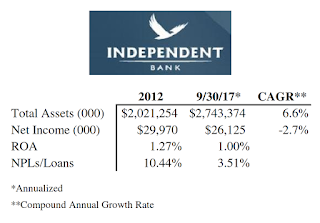 performing restructured loans, and that number plummets to 0.38%. Net charge offs are negligible. In
fact, year to date they have a net recovery. Interestingly, IBCP recently announced an acquisition in northwest Michigan, five years after they sold 15 branches in the northeast part of the state. Times change. And IBCP has delivered a five-year total return to their shareholders of 620%. This is their third straight Top 5 recognition!

Summit Financial Group, Inc. is a $2.1 billion in asset company headquartered in West Virginia, providing community banking services primarily in the Eastern Panhandle and South Central regions of the state, and the Northern and Shenandoah Valley regions of Virginia. Summit also operates an insurance subsidiary. In 2012, the company had net income of $7.0 million on assets of $1.4 billion. 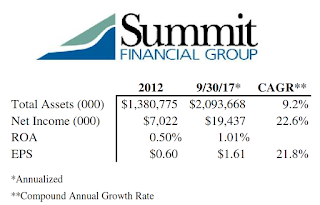 Today, the company has annualized net income of $13.2 million. Actually, the Bank had a one-time after tax litigation settlement (from a 2002-04 event) of $6.2 million. So their normalized net income is $19.4 million. A 50% growth in assets, and a 177% growth in net income. Positive operating leverage! And Summit has a couple of new acquisitions under their belt. One in 2016 and one this year. This marks Summit’s second consecutive year in the Top 5! Well done!

Similar to Old Second, HMN is a turnaround story. It is the holding company for Home Federal Savings Bank, a $715 million in asset thrift headquartered in Rochester, Minnesota with retail banking and loan production offices in Minnesota, Iowa, and Wisconsin. In 2007, the Bank had $1.1 billion of assets, $11 million in net income, and a 1.01% ROA. Then, kaboom! Over the next four years the Bank lost $58 million. A princely some to a Bank with $107 million of capital at the time. In 2008, the Bank had $216 million of Construction & Land Development (CLD) loans, 12% of them were either past due or on non-accrual. As the saying goes, in CLD, when the music stops, you don’t want to be the one without the chair. And HMN found itself without a chair. So they took TARP, and 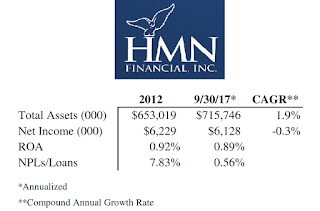 aggressively dealt with their asset quality problems, and shrank their balance sheet quickly to bolster capital ratios. By 2014, they cut the balance sheet in half. And since that time have grown loans over $200 million and deposits over $130 million. Today, they earned an 0.89% ROA, although that number has been bolstered by negative loan loss provisions. Their NPL/Loans shrank to 0.56%. Quite a recovery indeed and their shareholders that jumped in during the bleak days were rewarded!

#5. Parke Bancorp, Inc. (Nasdaq: PKBK)
Parke Bancorp, Inc. is the holding company for Parke Bank, a $1.1 billion in assets commercially focused community bank based in southern New Jersey, serving Philadelphia and its suburbs. Unlike the three of the banks above, this is not a turnaround story. Their ROA has been greater than 1% the past five years. In fact, I can’t explain exactly how they do it. I’m going to have to ask Vito Pantilione, their CEO. One strategy is limited branching. They have only seven, averaging $120 million in 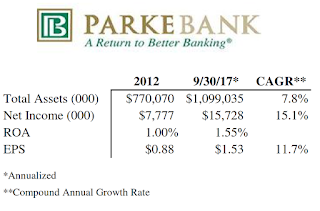 deposits per branch, which is nearly twice The Kafafian Group (my firm) peer average for branch deposit size. Their cost of funds is slightly above average, at 86 basis points. But their non-interest expense/average assets was 1.40%. You read that right. Apparently, Vito is cheap. Their NPAs/Assets has always, to my recollection, been above their peers. But their charge offs are not. And they have a 5.02% yield on their loan portfolio. Pretty good. That’s why they returned 580% to their shareholders the past five years!

Here’s how total return looks for you chart geeks, with the lower green, and flat line being the S&P 500 Bank and Thrift Index. 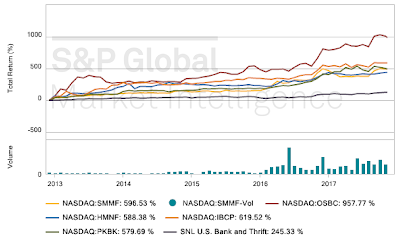 There you have it! The JFB all stars in top 5, five-year total return. The largest of the lot is $2.8 billion in total assets. No SIFI banks on the list. Ask your investment banker why this is so.

Congratulations to all of the above that developed a specific strategy and is clearly executing well. Your shareholders have been rewarded!

Are you noticing themes that led to these banks’ performance?
~ Jeff
Note: I make no investment recommendations in my blog. Please do not claim to invest in any security based on what you read here. You should make your own decisions in that regard. FINRA makes people take a test to ensure they know what they are doing before recommending securities. I’m sure that strategy works well.
< previous post
next post >