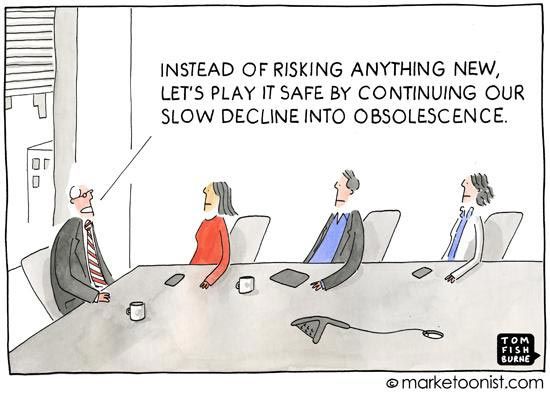 There are a lot of crazy ideas out there in banking causing us to think… “remember when such and such ridiculous idea was the new craze?” And we would laugh, continue to drink our cocktail, and lament that another financial institution threw in the towel to merge with a bigger brother.
That’s what I thought about while reading a recent Financial Brand post about Innovation in Banking: Killer Ideas? or Idea Killers? More talk about fintech, dinosaur bankers, and flavors of the month.
But their animation caught my attention. And it stirred images of a few strategic planning sessions I have moderated. Much to my chagrin. 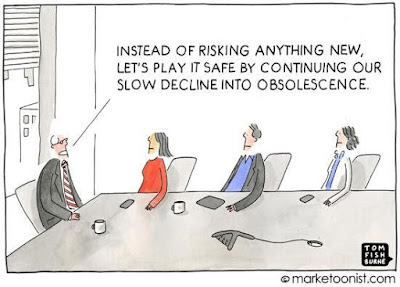 How do we balance strategic direction, customer demand, and the futurist or wildly over-caffeinated millennial that tells us we have to implement every shiny new object or we’ll die?
Six years ago I asked in a blog post Will Plain Vanilla Kill Community Banking? Did I get caught up in the change-or-die crowd? Was I, gulp, a futurist? When I wrote that post in January 2011 there were 7,700 FDIC insured financial institutions. Today there are less than 5,700. A 26% decline. Was I a futurist?
This brings me to the subject of Strategic Bets. They can be a strategic shift of your franchise, a new product line, or a new operating environment. Something you are not doing, will require some investment to do, and risks failing miserably. Bankers are slow to embrace strategic bets, opting for tweaks to business as usual. Which runs the risk of making the cartoon above become a reality.
Let me highlight some strategic bets for you. In the above blog post, I discussed Apple and Bank of New York Mellon.
Sticking with the Apple theme, in 2007, they launched the iPhone. Here was a personal computer company that decided… “mobile phones, yeah, mobile phones”. Much like they did “digital music, yeah, digital music. Thanks Napster!” in the early 2000’s.
How about Amazon? When they started in 1995, they sold books. Maybe those millennial futurists don’t remember this. Online book stores. Competing with Barnes and Noble and Borders? In 1998, they decided “why don’t we sell everything online?” And boom! Now my friend orders toilet paper through Amazon Prime. 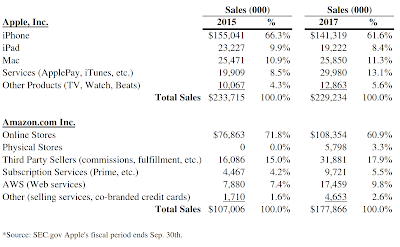 The iPhone represents 62% of Apple sales. Didn’t even exist in 2006. Physical stores grew from nothing to 3.3% of Amazon sales and is likely to grow. Because Amazon, with their culture of online sales and fulfillment, had that strategic bet meeting where they agreed “new-fangled brick and mortar store, yeah, let’s do that.”
Some other strategic bets that have the chance to transform or have transformed a company:
Pepsi – I listened to a podcast where Indra Nooyi, their CEO said they are focusing on their “healthy for you” line. Pepsi? Also, they are developing female friendly snacks. Apparently females like snacks that don’t crunch loudly or leave a residue on your fingers, and fit into a purse.
Overstock – Announced this year they are getting into Robo Advising. They have a heavily female customer base, and see opportunity to build an offering attractive to those that visit their stores and online space.
Leader Bank – A $1.2 billion in assets Massachusetts bank developed Zrent so it’s landlord customers could more efficiently collect rent from tenants. The bank now licenses the product to other financial institutions.
SunTrust – Developed Lightstream, a national online lending platform to provide consumer loans for practically any purpose. It’s proprietary technology gives consumers a virtually paperless experience.
I think there are enough examples of strategic bets transforming businesses. Combined with the alarming rate of those that don’t take strategic bets deciding to sell, shouldn’t you be thinking about calculated strategic bets that could become a significant part of your future success?
~ Jeff

2 thoughts on “Bankers and Strategic Bets. A Slow Embrace.”