By: Jill A. Pursell

Diversity in banking continues to be a hot topic. Based upon recent conversations TKG has participated in, there is a heightened interest and focus by many financial institutions to have greater diversity in their boardrooms, executive management teams, and in their overall workforce. TKG recently participated in a panel discussion on board diversity at the New Jersey Bankers Association Senior Management Conference.

Much of the recent discussion stems from lawmakers who either have or are considering legislation demanding diversity. Late last year, California passed a bill mandating public companies headquartered in the state to have at least one female director by the end of 2019. Boards with five or more members will need to add two or three women by the end of 2021. Other states, including New York and New Jersey, as well as lawmakers in Washington, are considering similar rules to compel diversity. States including Colorado, Massachusetts and Pennsylvania have already adopted resolutions to encourage companies to diversify their boards by having a certain ratio of female directors. These requirements are different from those of Illinois and Maryland who do not mandate diversity but require companies to disclose the gender, race, and ethnicity of their board.

Earlier this year, the Securities and Exchange Commission (“SEC”) joined in the action by releasing new compliance and disclosure interpretations to encourage companies to disclose how diversity characteristics of directors are factored into their nomination process.

Even before 2015, financial institutions were already complying with federal employment laws, maintaining equal opportunity policies, and having procedures in place to handle discrimination and harassment claims. They were also collecting and maintaining employee data for Equal Employment Opportunity reporting and Affirmative Action Plans.

Trends in the Level of Diversity in Financial Institutions 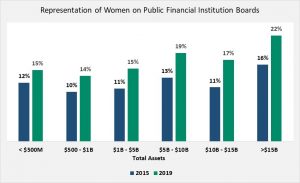 As TKG has worked with our clients over the past few years, we have noticed an increase in the number of women serving on boards and in executive positions. To verify the accuracy of our observations, we reviewed the most recent proxies of nearly 400 publicly traded financial institutions with assets over $100 million and compared them to proxies filed by the same companies in 2015. Our research showed that there has, in fact, been an increase in the number of women on boards at banks of all sizes. It comes as no surprise, however, that the biggest change occurred at financial institutions with assets greater than $5 billion. These institutions tend to have a higher level of institutional investors and their proxies fall under greater scrutiny by proxy advisory firms.

We also looked at the representation of women in executive positions as reported by companies in the proxies reviewed. Comparing the top paid executives from 2015 to 2019, there is an increase in the number of women, but the pace was slower than the increase in female board members. We also noticed an increase in the number of financial institutions who, in addition to the top salaried executives, included in their proxies an expanded list of their executives which resulted in a larger representation of women. This is because the list included executive positions such as the Chief of Retail Banking, Chief of Administration/Operations, and Chief of Human Resources which in our experience are generally held by women.

Our analysis of proxy statements was limited to gender diversity because the racial and ethnic backgrounds of board members and executive management was not reported. Only a few of the largest financial institutions such as Bank of New York included the demographic background of their directors in recent proxy filings. This is likely to change in the future. One indicator is the recent action by the SEC. Another is a bill, “Improving Corporate Governance Through Diversity Act of 2019,” recently introduced in both houses of Congress that will require companies to disclose the race, ethnicity, and gender of directors, director nominees and senior executive officers on an annual basis.

To evaluate diversity, we used results from the FDIC’s 2017 diversity self-assessments. As shown in the supporting graph, the responses show the workforce of financial institutions is far more diverse than management and among board members.

While the journey has been slow, the financial industry is starting to move the needle in achieving greater diversity. Some may point to the regulatory and government initiatives as the reason we are seeing change. This may be true to a certain extent, but it can also be attributed to having greater diversity in the next generation of bankers. Upon the retirement of mostly white male executives, we are seeing women and minority employees who once held middle management positions rising in the ranks and assuming executive positions.

We would like to think that companies with a diverse group of board members and executives are more likely to be high performing institutions. However, without “cherry picking” institutions, we could not find enough statistics to support this belief. The biggest value in having a board with diversified backgrounds including gender, race and ethnicity is to provide an environment where members can speak independently, share perspectives and values and develop ideas that can be leveraged in executing on strategy.

With all this positive momentum, are mandatory diversity requirements really necessary?

Despite the progress made, statistics show that when it comes to the diversity of board members there is still much more work to be done. This is especially true for smaller community banks where the board continues to be comprised of older white males. However, mandating diversity quotas is not the solution. Doing so is likely to result in unintended consequences including:

There are other ways to improve the diversity of the board and management team instead of mandates and quota requirements. They include:

Diversifying the board and management team should not be based on fulfilling a requirement. It should support the bank in the execution of strategy and in the day-to-day running of the bank in a safe and sound manner. It should also foster dialogue from different perspectives that can serve to increase creativity, expand and modify products and services, improve culture, enhance the bank’s brand and reputation, create and sustain quality employees, assist in providing superior customer service, and serve shareholders.

This newsletter relates to our Strategic Management service, click here for more information.