Best Book Ever on Word of Mouth and Direct Mail Marketing

I hope the title of this post compelled you to read its contents. If so, I suppose you are expecting me to offer my opinion on the most recent thought leadership on word-of-mouth and direct mail marketing. But I will not.
Instead, I will offer you my opinion on a book whose author is not 100% known, but thought to be a Syrian from Antioch named Luke. Recent? No. But would you be interested in a book that describes how to grow raving fans that span the globe from one poor person from a small town? Would you be interested in a book that doesn’t only stand the test of decades, or even centuries, but millenia? How about a book that boasts adherents from about one-third of the world’s population (see chart)? 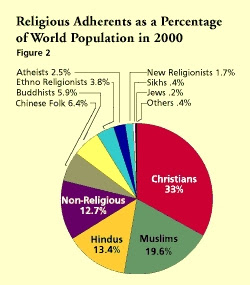 Source: http://www.religioustolerance.org/
﻿
I’m not talking about Facebook, whose founders are plotting as you read to turn their paper into big money. I’m talking about the biblical book Acts of the Apostles.
Now before you browse away because you may not be religious or not be a Christian, hold on. This is not a post about religion. It has been suggested to not discuss religion or politics in a business blog. But it’s my blog! And ignoring how a tiny sect of Judaism, whose apostles feared for their lives and locked themselves in an upper room, grew to a religion followed by 33% of the earth’s population is worth discussing.
How did the Apostles do it? The book of Acts tells the tale with a specific focus on two: Peter and Paul. Peter, as many of you know (perhaps a third of you), was appointed by Jesus to build his church after Jesus’ death. Indeed, Peter is considered the very first pope.
After Jesus’ death, the apostles weren’t out canvassing the countryside preaching the faith. As I mentioned, they hid from possible persecution. Jesus had to appear to them several times after death to get them out of the room. Have you ever heard of a doubting Thomas? Biblically based. Jesus had to guide Thomas’ hands into his wounds to convince him.
But convince him, and the rest of the apostles he did. They immediately began their ministry, teaching to mostly Jews, healing them, converting them. There was no Internet. No newspaper to take out ads. No postal service to send a direct-mail postcard. No PowerPoint deck. They only had each other and their words, that were inspired by the Holy Spirit, according to the Bible.
They also had a solid foundation of a legend, although it typically takes decades, sometimes longer, for legends to achieve legendary status. In a word-of-mouth world, legends were slow to come. But Jesus’ ministry resulted, in part, for the making of a legend that was to attract followers like no other legend before, or since.
The apostles were selected by Jesus not because of their stellar standing within the community. Most were poor and some were in positions not well admired, such as tax collector (not sure their social status has improved much). Nobody knows what Jesus was thinking when he chose such a humble lot. But I surmise he knew what he was doing… such as selecting good men, with good presence, that he could teach/were teachable, and who could preach to the world.
Paul was a different story. Not an original apostle, he enters the picture in Acts as a persecutor of Christians… until his fateful ride to Damascus. According to Acts, he was struck down and blinded by Jesus, and sent off to seek counsel in the faith before his sight was restored. Lesson learned: to knock the cover off the ball in word-of-mouth marketing, convert your biggest critic, and make him/her your raving fan.
Acts ends with Paul’s first imprisonment, as it was typical for Christians to be persecuted. Paul’s ministry focused on the Gentiles from Asia Minor to Rome. When not spreading the word in person, Paul wrote many letters to various Christian leaders. Much like a political campaign, the lesson learned here is to appoint leadership in key geographies and communicate, teach, and encourage them often.
Lastly, Acts shows the beginnings of the organization of the Christian church (present day Catholic church, as Protestant faiths took root as a result of the Reformation in the 1500’s). This organization lives to this day, 2,000 years after its first seeds were planted by a poor carpenter from Nazareth and a few followers that included fishermen and tax collectors.
In summary, my take on the lessons learned from the book of Acts of the Apostles for word-of-mouth and direct mail marketing:
1. Choose your first WOM marketers carefully, make them passionate followers, develop and train them, set them loose;
2.  Lay the building blocks to achieve legendary status;
3.  Develop an organization that is built to last with leaders in key geographies;
4.  Turn your greatest critic into your greatest apostle.
Wouldn’t it be shortsighted to ignore these timeless and proven word-of-mouth marketing techniques because they are found in the Bible?
~ Jeff
Note: My fascination with Acts of the Apostles as a quintessential word-of-mouth marketing guide does not make me a Biblical scholar. As one of my favorite comedians, Kathleen Madigan quips, “I’m a Catholic, I don’t read the Bible.” 🙂