Home > Insights > Random Stuff About Me

Random Stuff About Me

A tweep of mine, Ken Mueller (@kmueller62), posted an interesting bio-post titled “Random Stuff You Should Know About Me” on his Inkling Media blog. I saw his reference to it on Twitter, I read it, I enjoyed it, so I decided to copy it… with Ken’s blessing of course.
A key benefit of blog writing versus newspaper journalism is the ability to let readers know more about you than is reflected in a typical journalist’s bio page. Actually, journalists like to hide many things about themselves for fear of exposing their bias, as if we can’t discern their bias by reading their articles. In blogging, we have no need for the facade.
So here are some random things about me you might (or might not) find interesting and give you some greater insights into the person behind the words.
I grew up in Scranton, Pennsylvania. Veep Joe Biden once quipped that it was a “hard scrabble life” growing up in Scranton. It must have been hard for him since he moved out when he was a child. I went the distance. Scranton is lampooned in the popular sitcom The Office. Although I would characterize Scrantonians as quirky, we are not quirky like those in the series. I think we would be funnier. Scranton is an amalgamation of European immigrants that came over the pond between the Irish potato famine and the southern European immigration wave that ended in the 1920’s. We are Irish, German, Polish, Italian, Czech, and various other nationalities that came through Ellis Island to the land of plenty to mine coal. I am of Italian and Irish descent. I have a lot of internal conflict. My wife is Sicilian. I sleep with one eye open.
I am wired to engage my tongue before my brain. This is an offshoot to being a Scrantonian, as many of us suffer from the same affliction. It is not an endearing quality for a consultant. I have made considerable progress with this shortcoming. But be careful asking for my opinion. Because you may very well get it without the benefit of a filter. 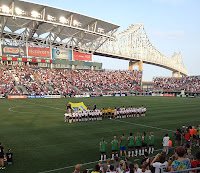 My sports allegiances are… You can read these on my Twitter bio (@JeffMarsico). But you may be curious as to the why. Here goes. Yankees: When you grow up in Scranton, you like the Phillies or Yankees, although there were smatterings of Mets and Pirates fans, but why torture yourself? My older brother liked the Phillies. Ipso facto, I’m a Yankees fan. This logic did not apply to me liking the Sixers, as all of my brothers do. Dr. J, Moses Malone, Mo Cheeks, Bobby Jones, Chocolate Thunder! C’mon, like anybody else and I’m not sure you followed basketball back then. St. Louis Rams: This one is out in left field, I will admit. But in 1974 the Rams drafted the only Heisman Trophy winner from Penn State, one John Cappelletti. Perhaps you saw the movie Something for Joey, where Cappy gave his Heisman to his little brother that was bravely suffering from Leukemia. I cried… and I never liked another professional football team. Notre Dame: You either liked Penn State or Notre Dame if you were from Scranton because 90% of us were Catholic and we had a fair amount of Irishmen. My older brother liked Penn State. Enough said. Washington Capitals: I never watched hockey growing up, so this is a later in life decision. The Caps farm team is the Hershey Bears, eight miles from my house. I saw many Caps play when they were young’uns. Philadelphia Union: I never saw a game of soccer until I was an adult. I had the same attitude as baseball and football fans. But my 13yo is pretty good at the sport, and I must admit it has grown on me. Soccer fans, by the way, are awesome. And check out the pic of PPL Park. What a great place to watch a soccer match.

I coach youth girls lacrosse. Note above that there are no favorite lacrosse teams. Because, like soccer, I never saw a game or even knew the sport existed. Even if I did, I would not have played girls lacrosse, which is a different sport than the boys variety. But I have noticed mixed results when parents coach (disclaimer: my 13yo also plays lacrosse and on my team). And when they asked for volunteers, I begrudgingly raised my hand, knowing I would work my tail off to learn the sport, how to coach, and how to develop young ladies into productive players and members of society. Lofty goals. It’s still a work in progress. But coaching middle school girls nets a treasure trove of quotes, such as: “Coach, I’m on my period and will probably be a b**** tonight.” Or, “Coach if you send me out there I’ll probably pee on the field.” It also helps with my personal goal of developing more patience.
I am uncomfortable with opulence and putting on airs. I grew up on the lower rungs of the socio-economic ladder. The first family car I remember was the Dodge Dart Swinger. My dad passed away when I was six. I had the same glove, bat, and cleats all through high school and I rode the shared family bike to games when the local tuff kids didn’t steal it. So I am not used to a life of driving luxury vehicles, staying in swanky hotels, and sipping single malt scotch. Some of these things are the trappings of my profession, and I don’t rebel by going to the local Econo Lodge when my colleagues stay at a top tier hotel. But I drink beer. I drive a Chevy. I’m sorry if that makes you think I am not successful.
There you have it. I could go on and on, but I get bored myself when blog posts get too long. However, if you have any questions, fire away. I would also like to know some factoid(s) about you, so feel free to share.
~ Jeff

3 thoughts on “Random Stuff About Me”